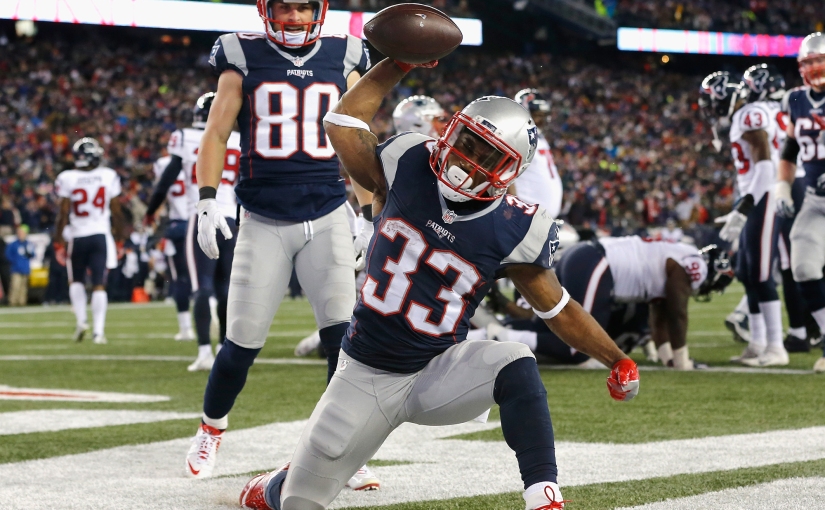 Now that the 2017 season has officially come to a close, I’ve decided to reflect on my weekly waiver wire targets articles, to see what my best calls of the season were. These aren’t necessarily the best players I wrote about, in terms of fantasy points, but rather the best calls; in terms of timing and the fantasy impact they had on the season. Note that I started the series in Week 7 of the 2017 season.

These guys are proof that, like I always say, fantasy championships are won on Tuesdays, not on draft day!

Predicting the best fantasy running back in New England may be my proudest moment of the 2017 season. In Week 7 I suggested going with Lewis, over a struggling Gillislee and tempting White, and those who took that advice claimed the RB 12 on the season. Since Week 7, Lewis rushed for 745 yards on 150 carries (4.9 yards/carry) and caught 25 of his 30 targets for 162 yards and 7 combined touchdowns. He finished the season owned in 99.2% of leagues.

Buried on the bottom of the Packers depth chart, it was hard for anyone to wrap their heads around a Williams claim in Week 11. Those who did, however, got a difference maker in Weeks 11-14. In that 4-game span, Williams rushed for 286 yards (71 yards/game) and caught 17 passes for 186 yards and 5 total touchdowns. Williams was owned in 90.1% of leagues at season’s end.

Goodwin had little production in Weeks 1-10, however, I thought Goodwin’s big play potential, combined with a new quarterback you may know by Jimmy GQ, could make him an impact player. Goodwin turned into exactly that, leading the 49ers on their 6-game win streak to finish the season with 33 receptions on 39 targets for 462 yards and a touchdown. He finished the season owned in 74.4% of leagues.

Finding a TE 1 on the waiver wire this season proved to be very difficult, Doyle, however, finished as TE 9 on the season. Doyle was miserable early season, catching just 17 passes for 163 yards and 0 touchdowns in Weeks 1-5. From Week 9 on, Doyle caught 38 passes for 312 yards and 2 touchdowns. Doyle finished the season on 86.2% of rosters.

Collins just missed making the first team, emerging from the only RBBC more confusing than the one in New England. Although Collins failed to score a touchdown by Week 9, I homed in on him for his volume; progressing from 7 carries in Week 1 to 18 carries in Week 8. Collins is a prime example of why you should follow the volume when it comes to running backs; he scored 6 touchdowns my suggestion to claim him in Week 9. Collins also rushed for 495 yards on 102 carries (4.8 yards/carry). He was owned in 89.4% of leagues by the end of the season.

While the Mixon truthers were still holding out hope, I was insistent that Bernard was the better and more versatile back. Bernard finished the season with 4.3 yards/carry on his 105 attempts; compared to Mixon’s 3.5 yards/carry. Bernard also had 13 more receptions than Mixon, on 26 more targets. He caught 389 total yards, which was 102 more yard, for 2 more receiving touchdowns than Mixon. When Bernard was given volume, he excelled; rushing for 337 yards and 2 touchdowns on 71 carries and 169 yards on 24 receptions since Week 13. Bernard finished the season owned in 60.5% of leagues.

Patient Agholor owners saw difference making production from Agholor in Weeks 12-15; when he caught 25 passes on 38 targets (66%) for 296 yards and 3 touchdowns. I reminded owners in Week 14 that Agholor’s volume demanded a roster spot, and those that listened saw the impact potential of Wentz’ favorite target. Following the Wentz injury, he finished the season on 66.5% of rosters.

There was a lot of wavering (pun intended) on Gordon when he was first reinstated. I pushed for you to claim him before seeing what he could do; given his skillset and need in the mediocre Browns offense. Gordon came out strong in Week 13, rewarding those that headed this advice, and caught 4 passes for 85 yards. In Weeks 13-17, he saw 43 targets, and caught 18 of them for 335 yards and 1 touchdown. Gordon was owned in 85.5% of leagues at the end of the season.

The Kittle selection goes specifically to dynasty owners. Those that saw the potential of him in Week 7, landed a young and dynamic tight end who is now teamed up with a quarterback who knows how to utilize him. Since Garoppolo took over in Week 13, Kittle caught 15 passes for 224 yards and a touchdown. He’s actually less owned now (5.7%) than he was in Week 7; which makes him a sneaky selection; and an early waiver target for dynasty players.

Follow us on Twitter @Top2Sports for daily fantasy advice and everything you need to know to win your fantasy championship throughout the off-season!

Matt’s writing is focused on dynasty and devy fantasy football. He loves blending his experience writing research in the field of education with fantasy football stats. Matt currently lives in Baltimore, MD and graduated from Eastern Connecticut State University and the University of Tennessee, Knoxville. You can follow Matt on Twitter: @TheFF_Educator View all posts by Matt Hicks